Eclipse Phase: Clouds of a Morning Star continued from the previous session.

Mission: To provide security and investigative services to Badal’s superior the LLA’s ambassador during an art show at the Cumulus Hotel, where reclusive posthuman artist Marquis d’Homem-Christos from the asteroid 163693 Atira would be showcasing alien sculptures he collected from the extraterrestrial Factors. LLA had intercepted a vague communique about a terrorist attack during the event and would like the attack thwarted. Their secondary mission was to help Gretchen Ambelina of Pax Familae by covertly disrupting the Marquis’ event which will deal a blow to the terraforming efforts of Venus, something the Solid Ground Initiaive (SGI) was a proponent of, and what Venusian terrorist groups like the Free Fall Network (FFN) were against. 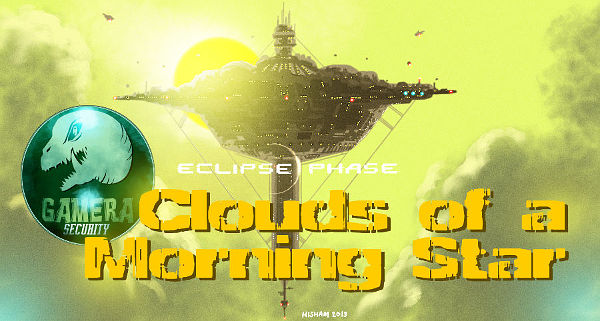 DANAI found herself frolicking in a green field beneath a bright blue sky and under a nourishing yellow sun. Baffled by current events, she looked down and discovered that she was in a body of a living fox, red bushy tail and all. What had happened before? She was uncertain.

Suddenly a window opened in the sky. A man looked at her from behind the window. Just when she wondered why there was a window in the sky, another one slid open seemingly across from the first window. Another man was there looking at her.

He then looked at the first man and asked, What does the fox say?

Then DANAI woke up from her strange dream.

The voice echoed from the darkness as DANAI slowly regained consciousness in the immobilised custom morph that belonged to the Marquis. She immediately remembered that her cover had been blown when the Maiko Clarimondo of the Geisha Bankers plugged into his cyberbrain in the suite at the 10th floor of the Cumulus Hotel.

The Maiko was still perched on top of the Marquis’ prone morph that DANAI inhabited. Her arachnoid abdomen and legs were slightly visible under her kimono. She hissed inhumanly, “Now we know you are not the Marquis, tell me who you are.”

The repeating voice was in DANAI’s head, synchonised to the flashing of the SACRE BLEU button in her mesh HUD. She still had no idea what the virtual button does and did not wish to find out. DANAI also noted that a signal jammer had cut her off from the rest of Gamera Security.

DANAI wracked her brain and then told the Maiko, “I am here to ensure that the Marquis would be much, much more in favour of our Venus terraforming efforts. I am here only to protect our investments.”

The Maiko mulled over this for a minute. Then she switched off the signal jammer and made a call via mesh. The GamSec VPN connection was immediately reestablished and DANAI transmitted information of recent happenings to Cable, Ina, Boris and Hokusai.

Meanwhile, GamSec had not been idle when DANAI’s signal blinked off. They knew exactly where the Marquis’ suite was and remotely rented a secure office cubicle in the building across the street facing the hotel. Cable contacted Ina-α at the airship, telling it to be prepared to run the DDOS program that it had set up at Cloud Nine aerostat. The original Ina infomorph driving the Venusian glider morph, armed with Hokusai’s sniper rifle, took its position at the window with the targeting recticle on the tenth floor of the Cumulus Hotel. But the room’s windows were closed and curtains drawn. 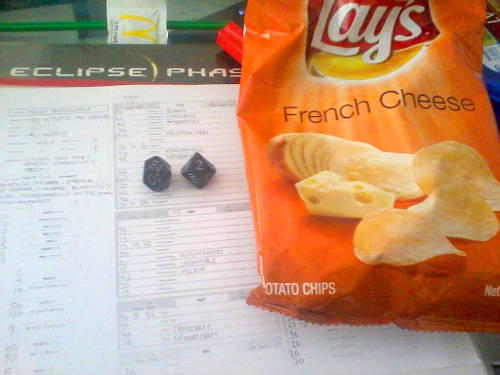 Cable and Hokusai used their legitimate security contractor IDs to gain access to the ninth floor. In the hallway beneath where DANAI was, Hokusai used his X-ray emitters to scan the Marquis suite and building a three dimensional profile of the room. He transmitted the tactical overlay to Ina across the street. Ina released the safety on the sniper rifle and told them, “If DANAI is terminally compromised, I’ll take out the cortical stack.”

DANAI was still talking up a storm in a cheesy French accent to delay the Maiko when the door opened. Several men in official Emergency Medical Responder uniforms entered. The Maiko looked pleased. The newcomers drew automatic pistols from their medical cases. She gestured them to apprehend DANAI.

Cable was monitoring the hotel’s elevator and corridor video feeds when he noticed someone familiar was wearing the medical uniforms. It was his anti-terraforming terrorist contact Saladin Pelita. He ordered Ina-α to implement the DDOS attack. Ina-α remotely connected with a server at Cloud Nine thousands of kilometres away to activate the program titled “release_the_kraken.exe”. Immediately online links via mesh began to slow down as the system was repeatedly assaulted by millions of data inquiries transmitted from Cloud Nine and routed through a dozen communication satellites. Security systems across Aphrodite Prime stuttered and fail. While the city systems were busy tracing the signal from Cloud Nine to quash it, it was a good time to discharge weapons and perform other criminal activities.

Ina aimed for DANAI’s cortical stack at the back of her synthetic skull.

That was when one of Saladin’s men turned his firearm onto the Maiko’s head and pulled the trigger.

Saladin told DANAI that all was well and she was being rescued by allies. DANAI told him that this incident should be enough for the event to be cancelled. She would return to Rekall facility to farcast the real Marquis – now trapped in a sensory deprivation VR environment thanks to the Maiko’s signal jammer – back to his asteroid, none the wiser.

Cable, listening in to the conversation, was happy that his contact had come through to save the mission and his team mate. Revealing his true name to FFN – or what appears to be FFN – had paid off. Before hotel security arrived, everyone stowed their weapons and gear, then disappeared in the chaos of the mesh DDOS attack. Also taking advantage of the DDOS chaos, DANAI returned to Rekall to order an immediate farcast. In the resleeving computer, she covertly switched her ego with the real Marquis who was then transmitted back to 163693 Atira.

When the chaos had settled and Aphrodite Prime had sent security personnel to Cloud Nine to disable the DDOS hardware there, Hokusai and Badal Jones retreived DANAI from Rekall the same way she was planted there: the tiny egg-shaped sheldon morph. Boris was disappointed that DANAI had not pushed the SACRE BLEU button.

Slowly, information was harvested from the next day’s news feed. The DDOS attack did not harm anyone. The Solid Ground Initiative delegates were unharmed but annoyed at the cancellation of the art show. Saladin Pelita and Free Fall Network were satisfied. Even Gretchen Ambelina was happy, much to Cable’s delight. The Maiko Clarimonda was resleeved but had no memories of the stand off at the hotel. The Marquis woke up on Atira absolutely confused. The furore in his social media feeds confused him even further.

However, the ship ferrying the Marquis’ sculpture, the one named “Agony” that DANAI had seen up close, disappeared some time after it left Aphrodite Prime, presumably attacked and crashed onto the surface of Venus.

DANAI wondered about her dream. What did the fox say?

To be continued in the next exciting session of Eclipse Phase: Clouds of a Morning Star.

Ascendant campaigns can view previous versions of their pages, see what has changed (and who did it), and even restore old versions. It's like having a rewind button for your campaign.

We've already been saving your edits, so if you upgrade now you will have instant access to your previous versions. Plus, you have our no risk refund guarantee , so there's nothing to lose.

Session #50 - Headjack Mindheist We follow a trail of mirrors...

I'm sorry, but we no longer support this web browser. Please upgrade your browser or install Chrome or Firefox to enjoy the full functionality of this site.